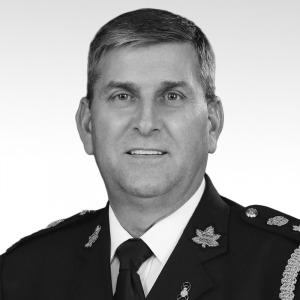 Eric Jolliffe (Chief of Police Retired) spent over 40 years in the policing profession. Eighteen years as a senior executive, 8 years as Deputy Chief and 10 years as Chief of Police in York Region leading a workforce of nearly 2500 with budgets in excess of 370 million annually.

He is a graduate of the Federal Bureau of Investigation (FBI) National Academy and the FBI Law Enforcement Executive Development Program, United States Department of Justice in Quantico, Virginia.

He is also a graduate of the University of Toronto’s Joseph L. Rotman School of Management Police Leadership Program and the Senior Management Institute for Police and the Institute for Strategic International Studies.

Having completed the Executive Development Course at the Canadian Police College and holds the designation of Certified Municipal Manager III with a Police Executive designation.

In 2012, Eric completed his Masters of Arts Degree in Leadership from Royal Roads University and later that year, received the first Alumni Leadership award from the University.

Over his term Eric has received many community recognitions some of which include; Parents, Families and Friends of Lesbians and Gays (PFLAG) Canada/York Region.  The Public Service Award from the Transformation Institute for Leadership & Innovation.  The National Ethnic Press Media Council of Canada and the President’s Award for Leadership from the Ontario Women in Law Enforcement.

In 2019, Eric received the Order of Vaughan and in 2020 was the recipient of the Portraits of Giving and the Character Community of York Region Lifetime Achievement Award.

Also in 2020 the Regional Municipality of York and the York Regional Police Services Board honoured Eric with naming of their state of the art police training facility the Eric Jolliffe Training Centre for Leadership and Learning.

Under Eric’s leadership YRP achieved the designation of one of the GTA’s top employees five years in a row.

Additionally, Eric has served on several community Boards and associations.

Having been a senior executive and CEO for almost 20 years he has extensive working knowledge of in the areas of executive leadership, humans resource management, strategic planning, risk management, project management, organizational/cultural transformation and technical innovation.